Many of you will have heard about the concept known as the French paradox, specifically how the French consume more fat than Americans but have lower cholesterol levels. While I don’t think there is a simple answer to this paradox, it is widely agreed that a major factor is the consumption of red wine. Red wine contains resveratrol, an antioxidant that is also found in grape skins, raisins, mulberries, nuts, peanuts, and Japanese Knotweed. Japanese Knotweed is actually the richest sources of resveratrol, and most resveratrol supplements are now made from this herb instead of wine grapes. In addition to being an antioxidant, resveratrol is anti-inflammatory and can play a role in reducing cholesterol and other fats in the blood. Both of these attributes have earned resveratrol a reputation for helping protect the heart, especially since inflammation is now known to be a major risk contributor for heart disease.

Besides these effects on cardiovascular health, new research is revealing other health benefits for resveratrol. Consumption of resveratrol has been shown to support the health of the beneficial bacteria that live in the gut. It seems to feed beneficial gut flora like bifidobacterium, an organism often found in probiotic supplements. Resveratrol was also shown to reduce the populations of some harmful bacteria that can inhabit the gut.  In fact, these changes in gut bacteria were correlated with reductions in cholesterol and inflammation, suggesting the changes in gut flora health may contribute to these other benefits. Additionally, resveratrol may help us fight viruses. Resveratrol may be able to send a message to cells to stop replicating viruses that have invaded them. Resveratrol also seems to have other attributes to help prevent cancer that are independent of its antioxidant properties.

I actually used to have massive amounts of Japanese Knotweed growing in my neighborhood in Seattle. Unfortunately since it was invasive there, it was being sprayed by the city and I couldn’t use it as a resveratrol source. If only we had a program to harvest the many useful invasive plants like this for medicine. Maybe we could all be healthier and our environment too. 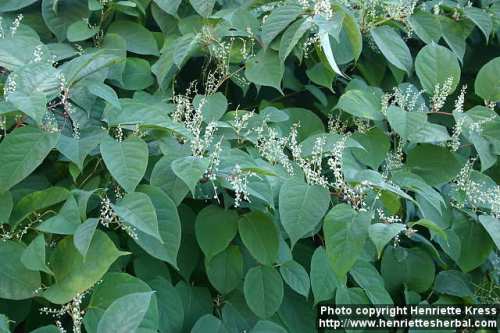